Skip to content
August 2, 2017 by jessica No comment(s) Uncategorized

Melt Away The Winter Blues 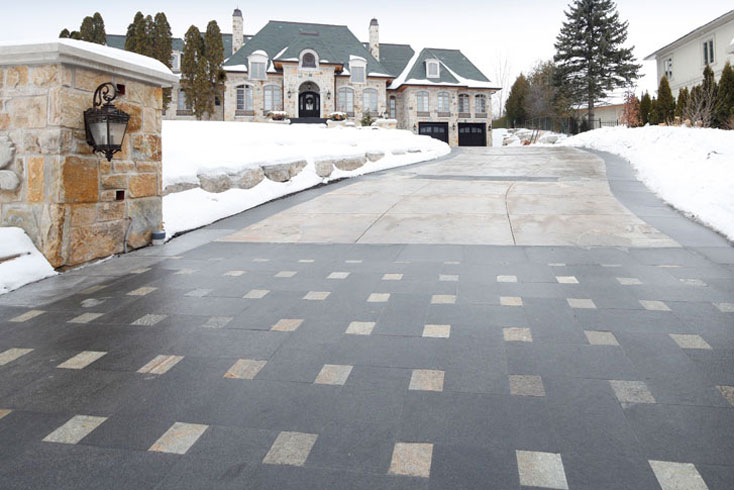 Heated driveways melt snow before it can accumulate
By Heather Pengelley

WINTER-WEARY HOMEOWNERS who see driveways that are devoid of snow in the midst of a heavy snowfall will tell you that it’s an awesome sight. “My clients get a lot of envious stares,” says Joe Guida, president of Patterned Concrete®, a Toronto company that specializes in concrete architectural products. “Three years ago, a guy walked into my office and told me I’d laid a driveway in his neighbourhood. ‘I don’t know what you did,’ he said, ‘but I want the same.’ That thing never has snow on it.”

Heated driveways, common in Europe, are gaining popularity in Canada for three good reasons, he says. Homeowners want a maintenance-free lifestyle, they want to prolong the life of their investment in a good-looking Patterned Concrete® driveway by 25 years or more and they want peace of mind.

His team lays a grid of polyethylene piping in a driveway’s foundation. The pipes connect to a boiler, which heats and pumps glycol through the snow-melting system. Once encased in concrete, the pipes are impervious to winter’s ravages, including frost damage and ground upheaval.

Automatic sensors maintain the driveway’s surface temperature at one degree Celsius during winter months. But when it snows, the drop in surface temperature signals the boiler to heat the gylcol to five degrees Celsius. The difference isn’t warm enough to detect by touch, but it’s above the melting point. Snow disappears as fast as it falls.

There is no flood of melt water, even in heavy snowstorms, and no icy buildup. The driveway stays wet, but it’s never slick or slippery. After the snow stops, the concrete dries and the surface temperature returns to one degree Celsius.

The snow-melting system is so reliable that in 15 years, Guida has never had to service a single unit. “A heated driveway will outlast three cars and a roof,” he says.

The cost is also economical, he says. Homeowners who choose a heated driveway no longer pay for snow clearance, and routine maintenance and repair costs are minimal. Snow-melting systems are less expensive to run than outdoor pool heaters, he says.

Then there’s the joy of pulling into a snow-free driveway after struggling through snowbound streets. There’s also the luxury of free time, because no shovelling is necessary. And worries that snow-clearing equipment and coarse road salts will chip, pit or scrape that handsome concrete finish are gone.